Visiting Bungin, the Densest Island in the World Sumbawa is surrounded by many small islands, some are naturally beautiful and still in pristine conditions. Some others are so unique in their own way. One of such unique island is Bungin, known as one of the densest islands in the world. This dense population is a natural condition as a result of the culture on the island.

In fact, this density is what makes Bungin so popular. This island is not your typical tourist attraction, you have to uncover another layer to see the beauty of this little island. Here is what you need to know about Bungin, one of the densest island in the world.

Bungin is located on the northern coast of Sumbawa. Technically, Bungin is located in the Bali Sea although it is well protected from the open sea by Panjang and Saringi Islands. Administratively, Bungin is part of Alas District, Sumbawa Regency, West Nusa Tenggara. You don’t necessarily ride a bot to get to this island as it is connected via a man-made road.

Bungin Island inhabitants are entire of Bajo ethnicity. Bajo people are known to thrive on the sea, they even genetically evolve to have a bigger lung so they can free dive longer to the sea. Bajo spread from the southern Philippines to many islands in central and east Indonesia. Bungin is one of such islands chosen by them.

Bungin is one of the densest islands in the world. The whole island constitutes a village in the district of Alas. With 0.8 square kilometers, this island has to accommodate more than five thousand people. The math says that the density of this island is a bit more than 5,900 people per square kilometer. This makes Bungin’s density level almost similar to Hong Kong and Haiti.

Bungin inhabitants have an ingenious way to solve their growing density problem. Instead of moving to other islands, a young couple who just got married is making their own island. By reclaiming the waters near the main island, they automatically expand the island. The reclamation is done using dead coral as the rock base.

Bungin island is not your typical tourist destination. There is no white sandy beach, panoramic crescent coastline, or classic palm trees. This island, though, is a heaven for photographers, especially those who love aerial photography. The density and the general view of the area here are so mesmerizing.

Even though they are not officially a tourist destination, Bungin does have a lot of visitors annually. This is the place for those who have the strong social awareness to visit and observe this wonderful society. 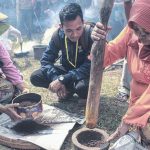